The Rise and Fall of Rome, A Brief History – Part 1

The Rise and Fall of Rome, A Brief History – Part 1

The Roman Empire officially came to life with the ending of the Roman Republic in 27 BC. This gave birth to one of the most influential empires the world will ever see. During its peak the Roman Empire spanned the entire Mediterranean. Reaching as high as Hadrian’s Wall in northern England, across to the black sea and as far south as the Nile Valley in Egypt, to close it off with the North African coast. It is estimated that there were 55-70 million inhabitants in Rome during this time, with some estimates pushing this as far as 100 million. This was a whopping 20% of the global population in this one empire, an impressive feat by any measure. The rule of the Roman Empire (as it was known) lasted until 476 CE, at which point the Eastern Roman Empire severed itself from the West.

With the birth of the empire came its first emperor; Gaius Octavius. He received the honorific of “Augustus” (Latin for “majestic” or “venerable”) after his victory in the Battle of Actium in Egypt. His reign began the time known as Pax Romana, or “Roman peace”, this was a 200 year long period of unprecedented stability and prosperity. Augustus was responsible for the first major expansions of the empire. He annexed Egypt, Dalmatia, Pannonia, Noricum and Raetia. Expansions were made into Africa, Germania and the conquest of Hispania was completed. Not every state was annexed into the empire, many became client states which provided a buffer around their borders. Back at home he reformed the taxation system, created road networks, and an official courier service. The Praetorian Guard were formed along with a standing army, police and fire fighting services were created and to top it off he rebuilt much of the city as well.

Tiberius was to be Octavius’ successor in AD 14. Tiberius became known as one of the greatest generals in the history of the Empire. He laid siege to Pannonia, Raetia and parts of Germania to lay the foundations for the northern frontier. He was known to be wise and temperate in his rule, by the time his rule ended he had multiplied the wealth he had inherited by 20 times. Mostly done by ceasing frivolous spending of the imperial treasury. He also abandoned the practice of gladiatorial games and forbade shows of respect towards him, such as naming a month of the calendar after him (like Julius Caesar and Augustus had done). After the death of his son Drusus, Tiberius withdrew from his responsibilities, delegating more and more to the trusted command of Sejanus, a Praetorian Guard. Tiberius eventually ordered the execution of Sejanus after realising he relinquished too much power. Caligula, his adopted son was named his successor, and in the spring of AD 37 acceded. 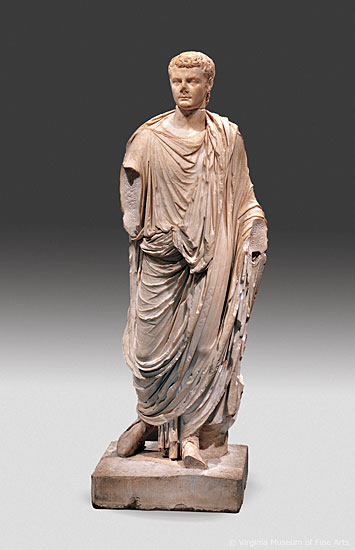 Caligula’s efforts began with enthusiasm and energy. He freed prisoners unjustly imprisoned by Tiberius, while also eliminating an unpopular tax. He threw lavish events such as chariot racing, boxing matches, plays and gladiatorial battles. Six months into his rule though, he fell severely ill. For a month he was on the brink of death, but in October AD 37 he recovered. It was obvious that he was not the same person however. Tortured by headaches Caligula’s demeanour went south.He often flaunted his power, eliminating his political rivals and forcing parents to watch their son’s executions. His most daunting proclamation was that he was a living God, ordering that a bridge be built from his palace to the Temple of Jupiter so he can convene with the Gods. In AD 41, the hate of the citizens boiled over. He was attacked and assassinated after a sporting event. Claudius was named his successor.

Claudius was more of an ambitious builder than a conqueror like his predecessors. He constructed many new roads, aqueducts and canals across the Empire. He did however, lead the invasion of Britannia, which he actually was not the first to attempt. 100 years earlier Gaius (or more commonly known as Julius Ceasar) had attempted to conquer Britannia in much the same way, twice. Claudius was seen as frail and vulnerable throughout his reign due to weakness from a childhood sickness. Due to this he had to constantly prove his worth, this resulted in the deaths of many senators. This eventually damaged his reputation but did not result in an assassination. He died in AD 54 after a 13 year reign, and his adopted son Nero succeeded him.

Nero focused most of his attention on diplomacy, trade and cultural life in the Empire. He promoted athletic games and ordered theatres to be built, in addition he made public appearances as an actor, poet, musician, and charioteer in plays. Traditionalists did not like this though, as it undermined the dignity and authority of his status and position. His projects did not come without cost, they were funded by a rise in taxes much resented by the middle and upper classes. Many attempts at his life were foiled, and many ringleaders executed. Eventually Nero fled Rome and committed suicide in AD 68.

Upon Nero’s suicide the empire was thrown into civil war, though brief, they were in conjunction with the rebellion in Judea. During this turbulent time four different legion generals became emperor, of which Vespasian won out. In AD 69 he established the Flavian dynasty, which would rule the empire for a brief (in the grand scale) 27 years. At the end of the dynasty’s reign in AD 96, the Senate appointed the first of the Five Good Emperors. Rome went on to reach its greatest heights under the leadership of these five.